Here are 10 quick things to know about Tokyo's Summer Olympics.

Number One. Tokyo hosting the Summer Games for the second time is 13 hours ahead of the Eastern time zone.

U.S. fans may end up watching some events on tape-delay.

Number Two. The Games will take place at 42 venues around Japan.

Race walking and the marathon were moved to 500 miles away in Sapporo to avoid the Tokyo heat.

The pandemic delayed the Games, but Olympic organizers kept the Tokyo 2020 name because the Olympics always fall in even-number years.

Number Four. A slow vaccination campaign and the rise of the delta variant forced officials to ban spectators from most events.

In a recently released survey of Japanese citizens, 83% of respondents stated they did not want the Olympics to go on as planned.

Already, at least 60 Olympic athletes and staff have tested positive for Covid-19.

Number Five. While there will be hardly any fans athletes from 204 countries will be attending.

The largest Olympic Nation? China. The smallest? The island nation of Nauru, with a population just over 10,000.

Russian athletes will be competing but not officially representing Russia.

Russia's flag, anthem and team name were banned from the competition following the 2015 discovery of the country's extensive doping program.

Twenty-nine athletes who have had to flee their own countries will compete as the Refugee Olympic Team. 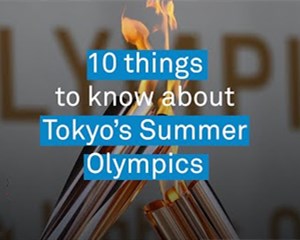 And for the first time, some sports -- like swimming, track and field and archery --will feature mixed gender events.

The IOC has introduced skateboarding, surfboarding, freestyle BMX, sport climbing, karate, and three-on-three basketball as part of a larger effort to attract younger viewers and inspire younger athletes to compete in the Olympic Games.

Baseball and softball, immensely popular in Japan, are returning for the first time since 2008 because the Olympics host country gets to select one sport.

Number Eight. The approximately 11,000 athletes competing in the 2020 Summer Olympics will include Kenya's Eliud Kipchoge, the only person to run a marathon in under two hours,

tennis phenom Naomi Osaka, who takes the court for Japan, and Cuba-born, Polish citizen Wilfredo Leon, who helped turn the Polish men's volleyball team into the second best in the world.

Team USA is made up of more than 600 athletes, including stars such as gymnast Simone Biles, sprinter Alyson Felix, skateboarder Nyjah Huston and swimmer Katie Ledecky.

Number Nine. Tokyo 2020 will be the first time an openly transgender athlete will be competing.

Number Ten. Around 5,000 medals have been produced for the 2020 Olympics and Paralympic Games, all made from recycled electronics.

It's impossible to know what the final total of medals awarded will be until competition is complete, as some sports -- like boxing, judo and wrestling -- award two bronze medals and ties -- where one or more medals could be awarded -- are possible in other events.