The world this week - Politics

The police said that they killed four suspects during a gun battle and had arrested two others.

It was unclear who ordered the assassination, or why.

Claude Joseph, the interim prime minister, who was due to be replaced this week, said he would take charge as interim president.

The opposition had been seeking Mr Moise's removal from office, saying his term had expired.

In February the government claimed it had uncovered an attempted coup against him.

American forces left Bagram airfield, near Kabul, which had been their biggest base in Afghanistan.

A small number remain in the capital, largely to protect the American embassy.

After 20 years America has effectively given up on the war in Afghanistan, which now looks likely to intensify.

The emboldened Taliban have been seizing territory.

Some of the official Afghan army have surrendered without a fight.

Local warlords are raising militias to resist the jihadists. 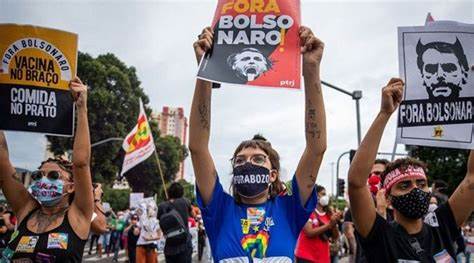 In Brazil the Supreme Court authorised an investigation into Jair Bolsonaro for failing to comply with his public duty.

The case claims that the president overlooked irregularities in a deal on a COVID-19 vaccine, Covaxin.

A senate inquiry into the government's handling of the pandemic is also looking into allegations that one official asked for a $1-per-dose bribe to purchase the AstraZeneca vaccine.

Thousands of Brazilians took to the streets, the third mass protest in just over a month to call for Mr Bolsonaro's impeachment.

Jacob Zuma, a former president of South Africa, was taken into custody for contempt of court.

He had refused to appear before a commission investigating the corruption that was rife during his time in office.

At least 50 people were killed by security forces in Eswatini (formerly Swaziland) after protests against the rule of King Mswati, Africa's last absolute monarch.

The protests began after the death of a law student, allegedly at the hands of the police. They say he died in a car crash.